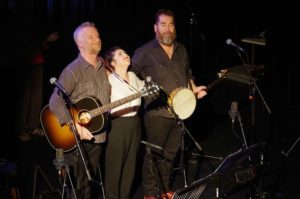 This week fresh from her support tour with Divine Comedy in France, Lisa will speak at the Australian Embassy to Ireland about her creative contribution to the award-winning Irish-Australian documentary Death or Liberty – about Irish rebels transported as convicts to Australia. The event, hosted by the Australian Ambassador to Ireland and the Australian Studies Centre, University College Dublin, screens the feature length theatrical version of the documentary broadcast last October on TG4, and will be introduced by Lisa, director Keith Farrell, and Australian author Tony Moore. Lisa will talk about her collaboration with England’s Billy Bragg and Australia’s Mick Thomas to create songs that bring the film’s historical characters to life for modern audiences.

Lisa performs emotionally powerful songs in the film about the United Irish Revolution of 1798; the independence fighter Phillip Cunningham, who was hanged for leading an uprising of Irish convicts in Sydney in 1804; the ‘Young Ireland’ revolutionary leader William Smith O’Brien, an MP whose dignified martyrdom during solitary confinement on Maria Island led to an international campaign for his release and inspired the struggle for independence in Ireland and Australia.

View trailer below and download Death or Liberty here.

A CD soundtrack/DVD Box set of Death or Liberty will be available early next year.

Author of the book Death or Liberty, on which the film is based, said ‘Lisa’s songs communicate in minutes what takes a writer a whole chapter to get across- she gets to the nub of characters and what they stood for, reminding us why these men were prepared to sacrifice their own liberty, and even their lives, for the freedom we enjoy today’.

‘… this is a seriously stylish film … the final product reflects the vast amount of thought that clearly went into the problem of how to tell this complex story. The landscapes are stunning, the historical commentaries lively and well informed, and the music superb. What an inspired idea it was to weave the story around a live performance at the Theatre Royal in Hobart by the legendary English bard Billy Bragg; Mick Thomas, formerly of Weddings Parties Anything and now a celebrated Australian folk-singer; and Lisa O’Neill, an Irish musician with a voice like nothing else you’ll ever have heard and a stage presence hardly less mesmerising.’

The Book Death or Liberty is available from Book Depository:
http://www.bookdepository.com/Death-or-Liberty-Tony-Moore/9781741961409

Lisa will perform at cwtch Festival in St Davids,

Announcement for those attending the Lisa O’Neil

There are some tickets still available for Lisa's

There are some tickets still available for Lisa's

ICYMI Lisa will embark on an Irish tour this Novem

(Link in bio) Last winter I was invited by the Nat

We are very pleased to announce an Irish tour this

If you are interested in getting periodic emails f

We’re so pleased to announce @cormac_begley_ as

Lisa performs at @bodyandsoulirl in 10 days on Jun

Thank you to everyone who came out to the Pavilion

Tickets on sale tomorrow (Thursday) at 10am… det

“It is not an overstatement to say that it was b

We are happy to announce that Lisa plays a headlin

If you would like to receive periodic emails from Lisa O’Neill please sign up here. Even if you think you’ve signed up before, please do so again. You will not get double emails.